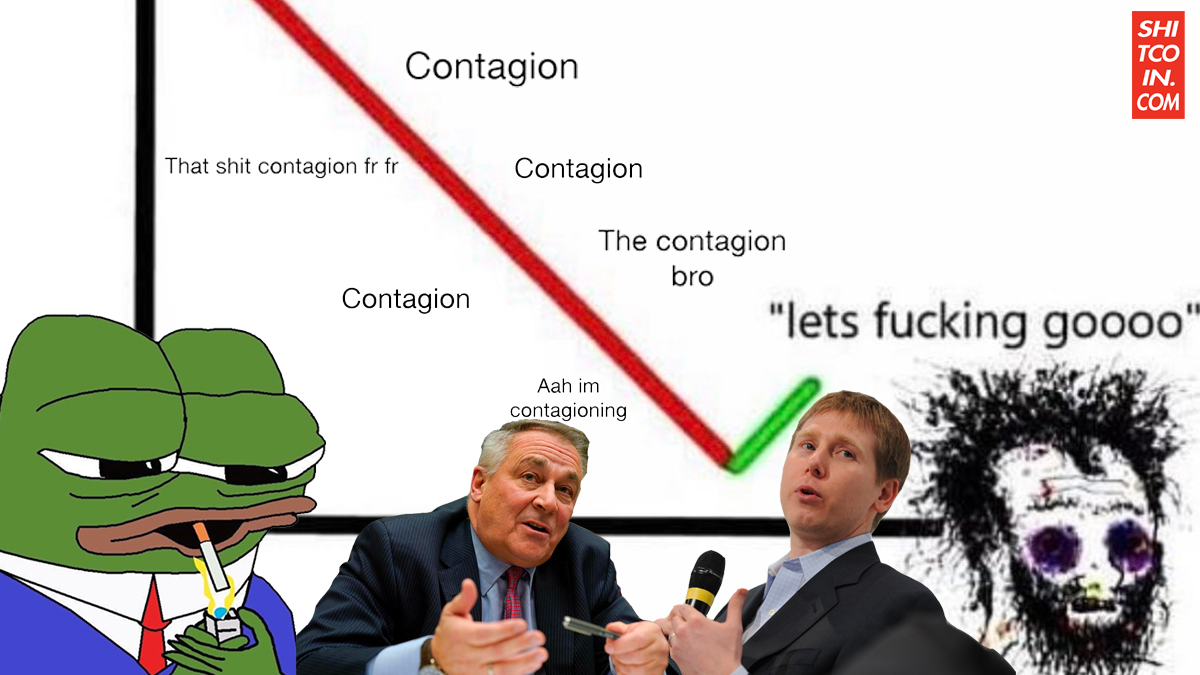 Before we get stuck into the action this week, here’s quick notice that some changes are brewing! Jmo has joined us to lead the Shitcoin.com Show. We will keep you updated with developments. It’s set to be quite the spicy spectacle.

Now let’s get to it. We opened the week with some positive price action as BTC climbed towards (and eventually past) $20,000.

Market participants couldn’t contain themselves at the sight of this mini-bull run.

But with the price moving on little volume, this wasn’t going to be an up-only affair. By the 19th we woke up to a slight drawback. Yes, we wrote drawback, we are chart analyz-ooors now.

Do you have the patience for this, anon?

Gainzy thinks that if you are still liquid, you are going to make it.

Meanwhile, Bitlord has some important advice: set up those positions, log off and come back to a party in your portfolio.

The Genesis situation has been leaving many worried. If you are suffering from GBTC-induced stress, take a second to enjoy this piece of art.

But why would you be worried you might ask? Well, this week saw rumours of bankruptcy on the horizon for one of the biggest lending firms in the space.

The warning signs were there as the interim CEO and COO went silent. That’s a lot of responsibility for one man!

With the writing on the wall, it was inevitable.

As expected, Cameron chimed in with another thread.

Genesis’ parent company, DCG have their fingers in a lot of crypto pies. With it being likely that many of their assets will be up for sale, we got wind that Hoskinson is looking to buy CoinDesk.

Developments on the FTX story keep on coming. The new CEO is considering rebooting the infamous exchange.

The spice kept flowing as SBF shared a drafted congressional testimony from December. The new CEO sure knows how to extract value!

Regardless of how the aftermath plays out, Arthur had some strong words for SBF. He questioned how some customers were treated differently to others.

As FTX’s financials become public we learned of a large Margaritaville bill. That place sounds like a hoot.

We wonder if Margaritaville serve food…

Brett, the former CEO of FTX US has been rather quiet in the past few months. However, he is posting again. Here is his lengthy thread which will hopefully remove him from the conversation around money mismanagement.

That doesn’t stop the trolls though.

Is that you, Caroline?

While we await the re-opening of FTX, Zhu and Kyle are filling the void with an exchange of their own. From FTX to GTX. This space is the gift that keeps on giving.

Arthur again with the spice.

Evidently, there are some in the industry that are quite competent at raising in difficult climates. Who wouldn’t watch this?

While talk of arrests swirl, our man Justin is playing 4D chess.

That won’t help the founder of Bitzlato though. The CEO of the Russian crypto exchange has the DoJ on his case.

While we wouldn’t say this means he’s an idiot, it’s an interesting find.

In all honesty, we are with Frank here. We had no idea what Bitzlato was before this went down.

For all we know, they did sell apes.

Bitcoin and crypto are easy pickings for the haters right now. Despite the CNBC trying their best to shill, Jamie Dimon thinks this is a ponzi.

If you are looking for a counter-trade opportunity, here it is.

Looking for some top tips for 2023 for 2023? Here’s an insanely long thread from Adam Cochran!

We were happy to see our sponsors, SideShift.ai, getting a mention.

There is still adoption going on out there. Emin was in Davos with the global elite.

And over on St Kitts, Bitcoin Cash looks like it could become legal tender!

To some hacker and scammer updates now. Razzlekhan is gainfully employed as a growth marketing and business development specialist now. This timeline.

Speaking of new jobs, Homero Garza has a new gig too. Nomad air!

Would Razzlekhan and Homero make the team?

The Lazaraus Group surely would. They have been moving funds from the Harmony bridge hack. The transaction web on this one is next level.

Speaking of hacks, a reminder here to not click random links. You could lose it all.

We hear Romano is great with code, but we have now learned he is not so great with fuseboxes. RIP.

While Romano was stuck on electrical tasks, Gainzy was hanging out with what one CT member called a “mid woman”.

These are interesting times and it’s important to keep perspective. People spend money on crazier things than NFTs.

We always hear talk of people selling the top and in all honesty, we rarely believe them. However, Peter Thiel actually did it. Chad.

If you aren’t equipped with enough financial prowess to follow in Peter’s footsteps, just hodl. You never know, you might one day get a girlfriend.