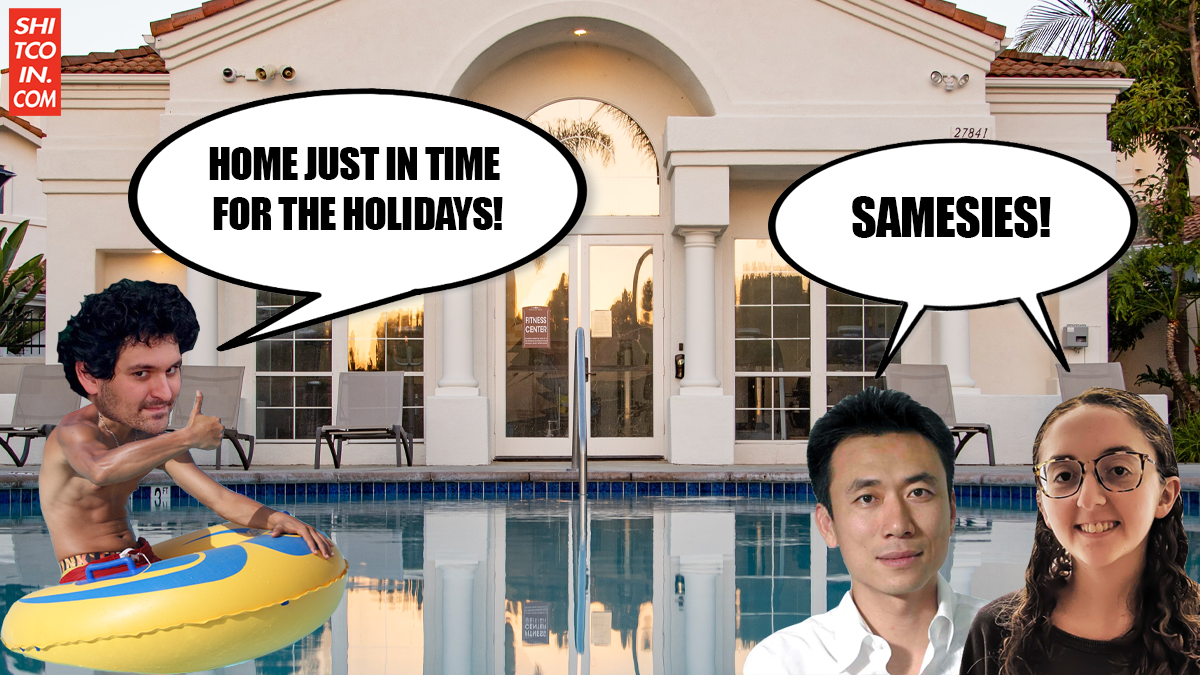 While a lot of the world comes to a standstill for the holidays, this industry just keeps on ticking. In this week’s newsletter, we have the latest from the FTX/Alameda fiasco plus the usual rugs and scams. As always, it’s a hoot.

We start with the latest developments from the biggest story of the year. How did Alameda perform so poorly when the cards were heavily stacked in their favour?

While SBF was getting acquainted with Bahamian jail food, Caroline and Gary were busy in the US. Caroline pleaded guilty to 7 charges and therefore, would see no further non-tax charges. Here’s the fine print if you are into that sort of thing.

This next tweet seems to have it wrong, her charges were not dismissed and she pleaded guilty, but the plea deal did make for some interesting reading. We don’t know what dirt she’s dishing on SBF but oh boy, she got off lightly.

While things were looking up for Caroline and Gary, SBF was just learning how things would play out for him. The first step was flying back to the US.

We are SO excited about the movie.

The wardrobe department is going to have a field day.

Enough of the quips, SBF has evolved from a boy on amphetamine patches and soy to a man in a week. It’s a crazy turnaround.

The community assumed his trip to the US would mean a bleak future ahead, but by some miracle, SBF is out on bail.

The political elite, who so happily took those donations are keeping quiet. Here’s the lowdown on why they aren’t saying anything, if it wasn’t obvious.

SBF has some heavy hitters in his corner. His parents have connections. We imagine this story is going to take some twists and turns.

Sam’s arch-nemesis, CZ, is on the PR push. He’s doing his best to tell the world that Binance are playing by the book.

They are doing Christmas hats too!

There has been much talk about proof of reserves, what do you do in this situation?

Back to the court cases. McCormack won against CSW but he still owes £900,000. That’s no fun in a bear market!

While the industry is dragged through the courts, let’s not forget LBRY. The SEC want them to pay up, when supposedly they cannot even afford to pay employees.

Who doesn’t have $20M hidden away…

Those of you who have been with us a while will remember Daniele. Once the poster boy of DeFi, he has had a fall from grace. He’s not giving up on Popsicle Finance though. The comments are quite the spectacle.

This industry is toxic at the best of times. When it comes to wash trading, NFTs are perfect!

Trump released his NFTs recently and those who got in could have made a killing.

Speaking of being left holding the bag, here’s a story about how to turn $9k into $40.

You can tell we are in an interesting part of the cycle when one of the largest bitcoin miners in the US filing for bankruptcy goes under the radar.

Here’s the math you didn’t know you needed.

But hey, it could always be worse!

There are a few people out there who can save us. Paul, we are counting on you.

While Layer 2 Labs aims to get the best bits of other blockchains on Bitcoin, the CEO of Paxful is just out to totally remove any mention of Ethereum at al.

Vitalik however, would disagree with that move.