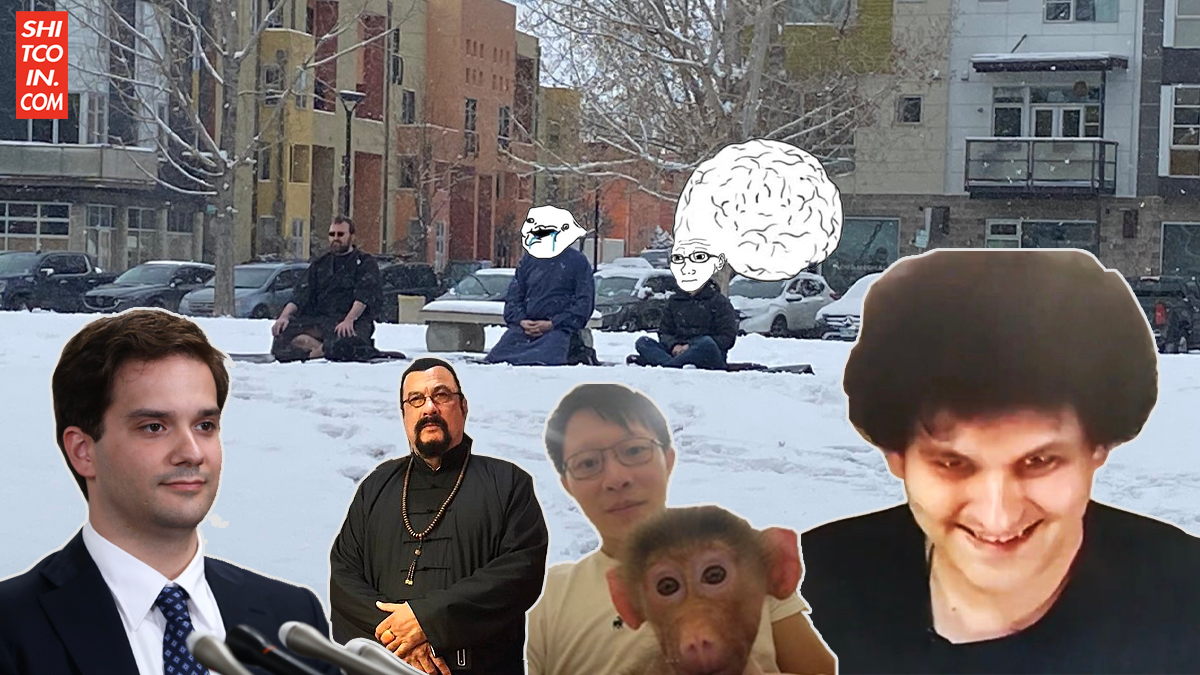 Newsletter #218 - Take Me Down To The Unrugged Era

While many of you are stuck in thoughts about horrible trades of the past, we are suddenly optimistic. There is no sign more bullish than the ECB calling Bitcoin irrelevant.

They just don’t get it.

Opponents of Bitcoin and crypto have had Christmas come early with the FTX debacle. SBF has finally been breaking his silence. He had a long-form interview in front of the suits with Andrew Ross Sorkin of The New York Times. Here’s the video.

In summary, he is sorry, his dashboards were off by billions of dollars and he will do everything in his power to make users and stakeholders whole… which is out of his hands at this point. The audience loved it! Round of applause for Sam!

Queue the conspiracy that Sam is a reptilian humanoid.

We are in a perpetual state of buck-passing. What we gather from this next nugget is that SBF knew about the backdoor to Alameda but he didn’t build it. So this meltdown is obviously someone else's fault, duh.

Coindesk, who broke the article that led to this downfall, came out with a hit piece.

We don’t have much faith in SBF pulling this back. This is largely because he is still consuming heroic portions of soy.

Here’s a poem that expertly sums up the state of things.

The industry fallout is real. Why were Huobi holding customer funds on FTX?

BlockFi are doing all they can to save themselves. They want that stake in Robinhood.

If you are wondering why they think they are owed those shares, here’s why.

One guy who knows more than most about crypto exchange bankruptcy is Mark Karpelès. He sat down with Cobie and Ledger. Get educated.

There’s not a week in crypto without a hack. Ankr had a rough start to December with a sizeable exploit.

CZ jumped in with an update.

To Gensler now. After he got heat for his relationship with SBF, he wants the world to know he is the world expert on crypto. He even thinks Satoshi could be female.

As we learn what FTX looked like on the inside, here’s the story of Fantom. This next article from Andre Cronje gives you a sneak peak into the ups and downs. It’s a wild ride.

In the end, every crypto CEO becomes Steven Seagal.

Kyle Davies is on his quest for enlightenment. He has taken it down now, but he was still inadvertently scaring away potential AVAX investors with the logo in his username until recently.

Kyle’s partner in crime at 3AC, Zhu Su has been trying a new look. How do you win back the public when you helped create a bear market? You put on glasses and pose with primates! Scroll for the images below.

BitBoy has been riding the wave of this crypto meltdown, marketing himself as a man of the people. Here’s a video of him shouting at a woman calling him out for scams of the past.

If there are any lessons in all of this, one is that there are people smarter than all of us and there’s no shame getting out when they call the top.

And finally, selling ponzis only leads to one thing.