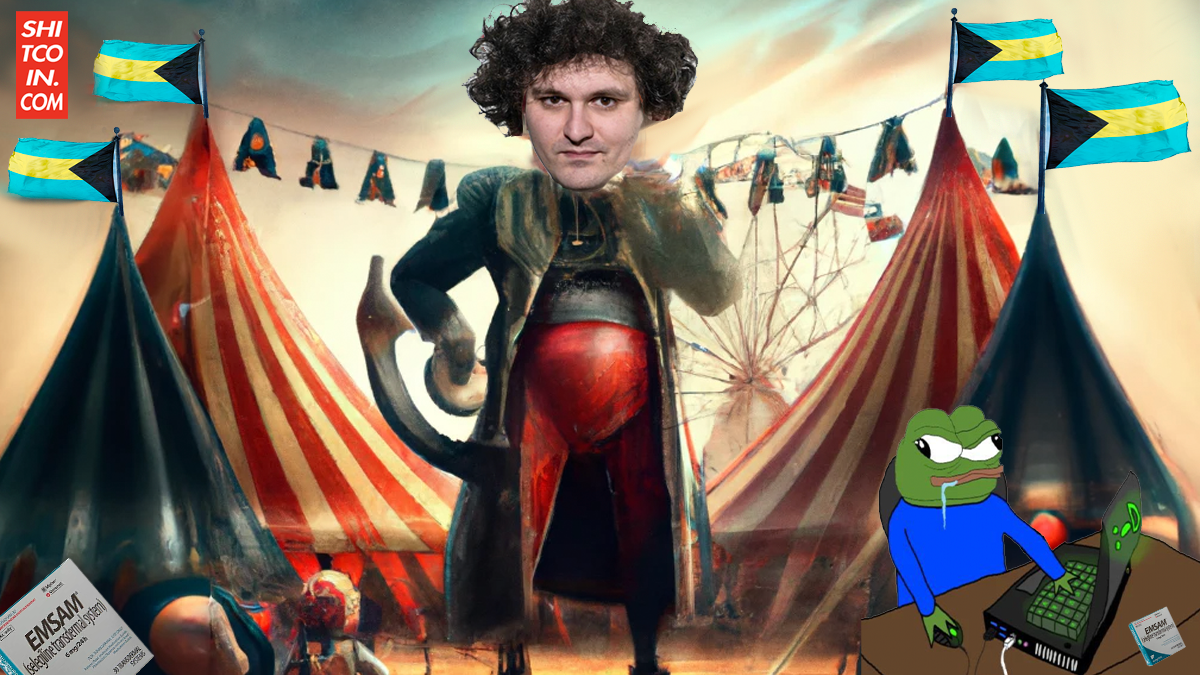 You can probably guess what the centrepiece of this week’s newsletter is. FTX and their catastrophic meltdown are developing by the minute. Let’s dive into the spicy shenanigans and revelations of the last week. Before we do that, we will start off with some cringe.

And a musical masterpiece.

You’ll own nothing, and you’ll be happy.

Would you trust Brickman-Fried to manage a food truck? Probably not at this point.

We were all waiting for SBF to share one of his infamous tweet threads. We did get just that, but it was an annoying series of single letters over several days, topped off with more “I’m going to make this right”. Which is SBF talk for “I’m going to make it back in one trade”.

Someone get this man some Emsam!

We also were entertained by a Twitter DM interview Sam did with Vox. It turns out his effective altruism and lobbying were just a front.

He’s not attending this… but what could have been.

Whatever SBF is telling us he’s going to do is kind of pointless. FTX has filed for bankruptcy and Sam has no control over what happens now. John Ray, who is overseeing proceedings said internally FTX was an absolute shitshow.

Arthur Hayes wrote a long hit piece on how SBF got to where he did. Arthur seems to think that Sam was destined to get into rooms many of us could not. In his next piece, he’s looking to “demonstrate how SBF constructed a completely false life and persona in order to fool everyone about who he was and his intentions. “ Spicy!

We have all heard about the excessive stimulant use by this point. We imagine Sam was on the stimmies when he wrote this.

Did the drugs contribute to the mismanagement? Here’s a good read.

And more is surfacing about the “therapist” who administered all of this.

What was going on at FTX is intriguing. We aren’t sure how intrigued we are by an SBF and Caroline sex tape though.

We can’t confirm if this is real, but supposedly they threw a pool party!

This is going to make an insane future book and movie!

We hope some of SBF’s poor gaming performance feature in that motion picture. When you are high on amphetamines it’s easy to think you are amazing at everything.

He took some time out during this turbulent period to get some game time in. One day he’ll get better.

We cannot ignore Caroline. The CEO of Alameda has been quiet post-meltdown. Here she is learning from Richard Heart.

This is all speculation at this point, but big if true.

Her Tumblr was quite the spectacle. She had a type and interestingly called herself “Fake Charity Nerd Girl”.

There are women in crypto after all!

Back to Sam though. His dad is a pro at this tax shelter stuff and we can only speculate that he had a hand in this mind boggling set up.

It’s all coming out now…

The Albany looks pretty nice. What a great spot for some polycule debauchery!

Speaking of The Bahamas, the government there are distancing themselves from the situation as much as they can.

They even went as far to address the Bahamian withdrawals… They had nothing to do with it! Promise!

We will just leave this here.

Oh, and this too.

On the topic of the FTX hackooor, they have built a pretty sizeable ETH position.

Every day new information emerges. How deep does the rabbit hole go? Nobody knows. All we know for sure is that the spice will keep flowing. The New York Times are doing some pretty low level journalism. How much did they get paid off for this?

As Twitter becomes the default source of FTX-related news, the CT community has been busy with their exceptional commentary. Here are some of our favorites.

We should have really seen this coming. It was written.

If only Sam had read some books…

We have strong flashbacks to SBF ghosting Tom Brady on that Twitter Spaces.

The effective altruists aren’t giving it back to Tom and everyone else who lost by the way.

There are cracks appearing across the industry. Jump are supposedly okay.

Multicoin Capital however, not okay.

Genesis released a statement about how focused they are on serving their clients.

But it didn’t last long.

This industry is pretty incenstuous.

Peter, who was sponsored by BlockFi put out a thread to address some accusations.

Salt looked like they also took a sizeable hit as well.

This meltdown presented the perfect opportunities for some of the industries fallen heroes to attempt a comeback. Zhu Su was busy making up stories to clear his name.

It’s not a good look for the former 3AC CEO.

This isn’t a good look either. Do published an audit that he commissioned himself. Awkward.

With all of this action, exchanges scrambled to show proof-of-reserves. Swanson here to tell you this is just theater. Don’t be a sucker.

That money is doing the rounds!

And supposedly Crypto.com were taking part in some shenanigans… or large scale money mismanagement.

Binance, along with Kraken and a few others are likely the only exchanges who can post full proof of their reserves. CZ here with some self-promotion. Shock.

As we go further into this fiasco, regulators are investigating what Binance had to do with it.

It’s not looking good out there Shitcoiners. Our significant others have been wondering why we have been staring at our screens so much over the past couple of weeks. This isn’t normal for a bear market.

They were right all along.

But buckle up champs, this week will be BIG.

As much as we all hope we will see the warning signs next time, we know we will never learn. This is the way of the crypto degenerate. Ape strong, together.